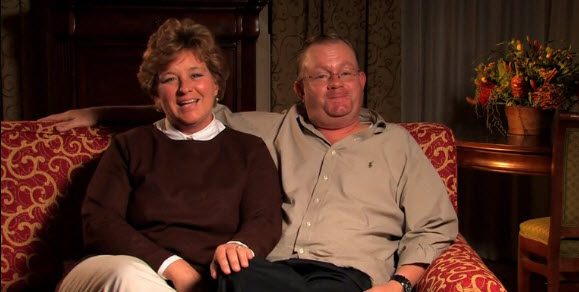 Age: 53 and 49
Location: Utah
Addiction: Alcohol
What’s Memorable: Dear god, this one. I’ve seen it probably 12 times and the dysfunction/codependency gets me every time. Married almost 30 years, became alcoholics together only 5 years ago, and now they’ve lost almost everything.  Their kids break my heart.

Official Synopsis: Ed, 53, and Bettina, 49, had a picture-perfect life, including three adoring kids, a dream home, sports cars, motorcycles, and a respected place in their church community. But six years ago, Ed made a bad career move and ended up unemployed. He and Bettina lost everything they had worked for. They began to drink, and quickly became alcoholics. Ed has been hospitalized for internal bleeding, and Bettina for withdrawals so excruciating she thought she was dying. Their children have begged them to stop drinking, but it only strengthens the bond between Ed and Bettina, leaving the children to wonder, “How do you intervene on a married couple?”