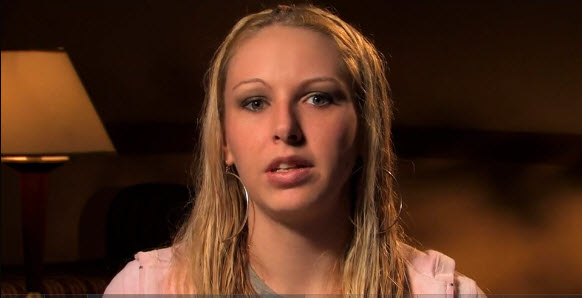 Age: 25
Location: New Jersey
Addiction: Heroin, Xanax
What’s memorable:  The fact that she signed a DNR so that the next time she overdosed they wound’t save her. Her seemingly paranoid accusations against her mother than turned out to be pretty much true. The way her “recovering addict” mother sits with her when she’s high and makes her talk so that she knows she’s not dying of an overdose. How much guilt her mother feels. The amazing post-treatment transformation. She looks SO MUCH BETTER. It’s funny, you don’t even know how terrible these addicts look until you see them sober.

Official Synopsis: When Angelina was eight, her family grew apart over an argument about money. Her mother turned to prescription drugs and cocaine to deal with the stress. After graduating from high school, Angelina became her younger brother’s legal guardian, but she was overwhelmed by the job of taking care of her brother and addict mother. Angelina became addicted to OxyContin and spent her trust fund of $350,000 on the drug. Then Angelina turned to cheaper drugs and heroin to support her habit.