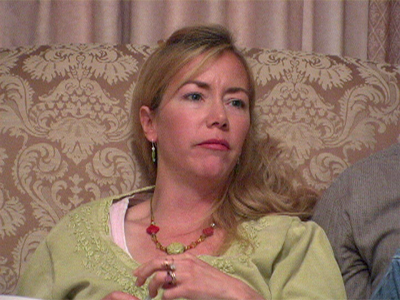 Age: 40
Location: Annapolis, Maryland
Addiction: Alcohol
What’s Memorable: This episode can’t be found anywhere, and most references to the episode have been removed. Odd. Anyway, I watched it years ago and couldn’t find it to re-watch for this directory, so I’ll just say what I do remember. The wine, the denial, the childish weakness, the shitty supposedly sober boyfriend that convinced her not to get help at the last minute. Well the episode has been uncovered and posted on YouTube by Ramoin so I got a chance to watch it again and oof! What an episode. My original ‘what’s memorable’ wasn’t all the far off from what I would say now so I will only add that her aversion to being alone was at such odds with her compulsion to push everyone away, it’s striking. Also the fact that Andrew was even asked to be in the Intervention seems ill-advised, but that he was allowed to accompany her on the plane to treatment was straight up wrong. I don’t recall anyone else on this show being able to bring someone on the trip with them do you? Love you Jeff, but that was a seriously bad call. She was being a petulant child making unreasonable demands and I think he should have called her on it, not given in.

Update: Betsy ‘Bets’ Bender passed away on August 8, 2018 after a battle with breast cancer. Obituary

Official synopsis: Betsy went through a devastating time when her marriage fell apart. She began drinking heavily to help the pain. Her family is trying to help her with no results. They finally give her an ultimatum. She either quits drinking or she will lose all of their support and she would be on her own.