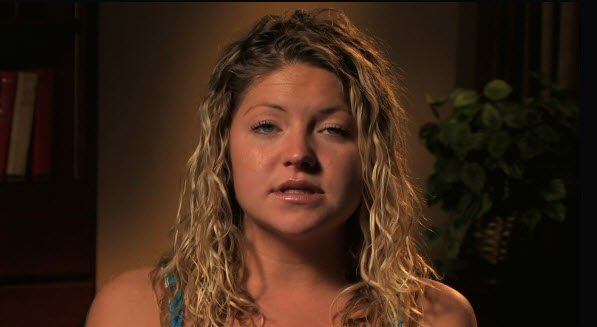 Age: 24
Location: St. George, Utah
Addiction: Alcohol & Pain pills
What’s memorable: Lana makes the Most Disturbing list on account of what happened to her only 6 months before the episode aired. I can’t begin to imagine the feeling of watching yourself being raped for 5 hours on video and not knowing it ever happened (she was drugged). I understand why the police showed her the tape, but I can’t help but wonder how different things could have been if she didn’t know it ever happened. I just don’t know how I would feel in her situation. It’s so upsetting to even think about. Also memorable: the darling, sad little brother who takes care of her, her very decent family that just don’t get it, the violent boyfriend, the sheer amount of wine she drinks.

Official Synopsis: Lana grew up in a family of 11 children, and her older sister introduced her to drinking at the age of seven. Despite this precarious start, Lana excelled in sports and was active in the church. But at 18, Lana began to enter into dangerous relationships with men and started abusing drugs and alcohol. She was in two near-fatal car accidents. And now, too make things even worse, she is in a relationship plagued by physical violence.